Hello :) I was most happy when a few weeks ago, I discovered where to buy Australian quinoa, from Tasmania in fact. You see unfortunately, even though quinoa is a fabulous nutritious superfood, we in the West weren't the first to discover that! It's been a staple food in South America (particularly Bolivia) and now the ethical issue is we're now taking one of their staples, naming it the new "trendy seed" and are quickly incorporating it into our diet.

The short answer is for a lot of people now who have relied on quinoa in their diet (especially important for vegetarians or those who cannot afford meat, because it's a complete protein), it's now become very expensive as most of it is exported and many are forced to consume poorer quality carbohydrates such as pasta and noodles. Yes, there are other examples of this and I’m not saying, never buy quinoa again, but it’s just another reason to buy local if you can. It’s an interesting topic and distressing too, something we probably don’t tend to think about. I had no idea until I read a few articles.

I bought the Australia quinoa from a place called Alfalfa House, in Enmore (opposite Enmore theatre). It’s a not-for-profit food co-op, take your own containers type of place where you can buy numerous types of nuts, seeds, grains flours etc. You can get discounts by becoming a member and volunteering too. Awesome! But the thing I discovered about this Australian quinoa is that it still has the naturally occurring outer coating, saponin, which gives it a bitter flavour. Most of the time quinoa has been rinsed to get rid of the coating you see.  The first time I cooked it, I only rinsed it quickly and it tasted pretty, well, bitter. But after rinsing it a few times, it was fine.

I also bought buckwheat a little while ago, although haven’t really known what to do with it. It’s quite interesting being neither, a grain or seed, but in fact a fruit. Rather confusing, considering it’s called buckwheat. This particular buckwheat has been activated, meaning it’s been soaked and dehydrated first, making it very easy to digest. 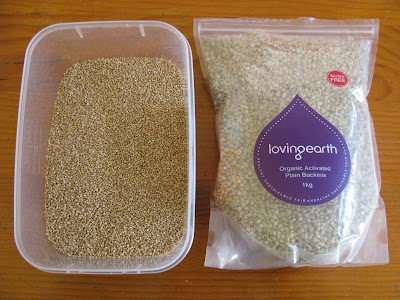 Now, let’s talk about these fritters! I decided to make them last Friday night, when as per usual I wanted something quick but healthy. Quinoa Corn Fritters (recipe link)... thanks Heidi! I just added ½ cup cooked buckwheat. 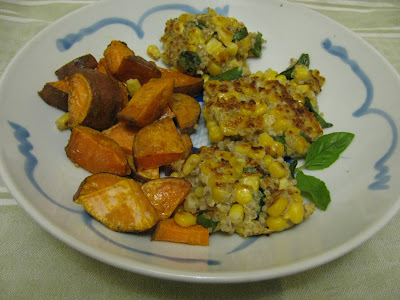 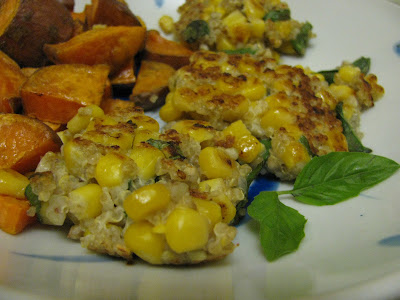 I thought they turned out wonderfully :) Crispy quinoa & buckwheat tastes pretty awesome, and totally jazzes up corn fritters. Served with roasted sweet potatoes, yummo. Oh and with the leftovers I scrambled the mixture and topped with haloumi. Gosh, I love leftovers!