Hello :) Thursday night was spent watching River Cottage. It's only (one) of the best shows ever, where Hugh grows his own veggies, cooks wonderful dishes, and forages for local produce. Well on this particular episode he mentioned that he loves to roast rhubarb with honey, instead of the old fashioned stewing with sugar. Maybe some of you roast rhubarb, but I don't really think to cook it that way (well actually, except when making a crumble) so I decided to this afternoon! I'm usually in a rush when cooking rhubarb, so it's usually stewed and on top of porridge with maple syrup. But not this time!

I just used a few stalks of rhubarb, and adjusted the recipe. About two tablespoons of honey was drizzled on and a good squeeze of orange juice. Rhubarb definitely needs sweetness, and not always from sugar either. I served my roast rhubarb with vanilla coconut icecream :) 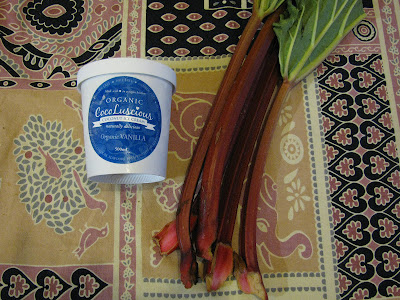 The roasted rhubarb turned out really well. It was nice to still have the shape, and for it not to go all mushy. Honey is a perfect sweetner and kind of caramelises too, and the orange juice also works to counteract the tartness. This brand of coconut icecream is delicious, sweetened with agave and with the added vanilla it's extra yum. 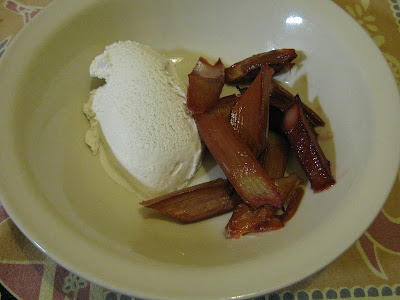