Photos from the past week...

Hello :) I thought I'd be able to post a little more this week, but I've been a busy bee with Uni starting! I've had a great week though and it's been exciting going to lectures, writing notes, meeting people and so on! I can't say Chemistry is my favourite subject but I'm hoping as tutorials and student study sessions commence this coming week it'll get easier. (Any tips for a first year science (nutrition) student??) I still have to get used to the long train trips and the early morning starts but I think as time progresses, it'll become routine. As I (unfortunatley) have very limited time to cook during the week, I've been opting for healthy convenience foods. Here's a peek at some things I've been eating...

I usually eat breakfast around 6:15am and have a bowl of muesli with rice/oat milk and wholegrain toast with tahini, honey and sliced banana. It's super filling which is great as I don't generally get a break until close to lunchtime (although I tend to snack on nuts/seeds/dates in between lectures). I got the idea of putting tahini on toast from the lovely Natalie, where she posted her breakfast for a week (here) and as she mentioned, tahini a great calcium source which is a bonus! 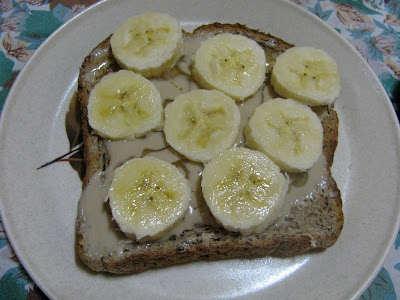 This was my lunch on Wednesday. I didn't actually get home till about 9pm (very late!) so it had to last until dinner time! I had a sandwich with hummus, lentil patties, mushrooms and spinach leaves, an apple,  a bounce ball (purchased from the uni shop- these 50g balls are full of nuts/seeds and sweetened with brown rice syrup. Has anyone tried them?) and vegetarian biryani (leftovers from dinner) which I added chickpeas to for extra protein. 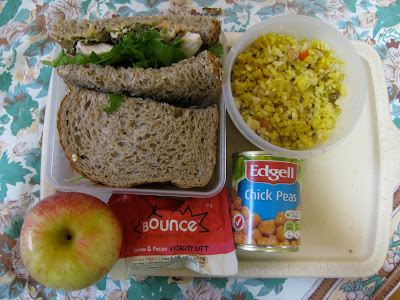 And here's the vegetarian biryani my mother made for dinner the night before. It's a beautiful brown rice dish with strong flavours of cardomom, sultanas, chopped almonds and tumeric. 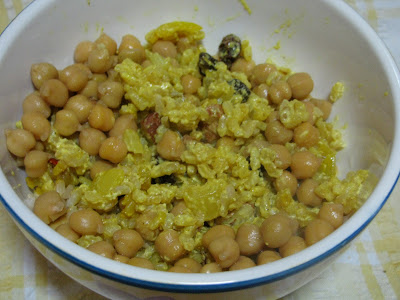 A lentil dish I made one night which was super easy. It's healthy comfort food! Here's what I did:
1. Fry an onion for a few minutes in olive oil
2. Add spices such as cumin/tumeric/curry powder and stir for another minute
3. Add half a cup (or however much you want) of red lentils, stir for a minute and add a can of chopped tomatoes and some water (or vegetable stock).
4. Bring to the boil and simmer until lentils are cooked.
5. Add this to cous cous and top with fresh herbs and a dollop of greek yoghurt. 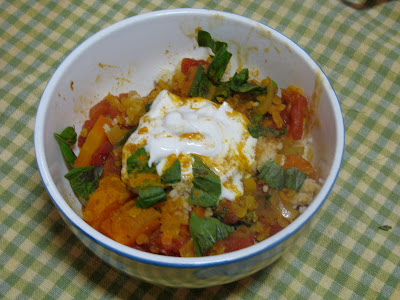 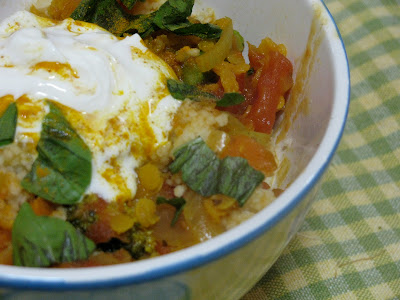 Yesterday my mother made a delicious cake with carrot, apple and walnuts :) It was moist and delicious, using some olive oil instead of butter. 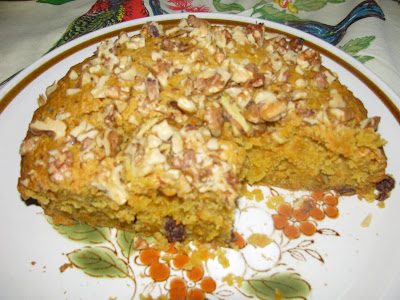 And finally some pancakes we had this morning! We used half white flour, half buckwheat flour which turned out to be a success! And maple syrup and strawberries is a winning combination :) 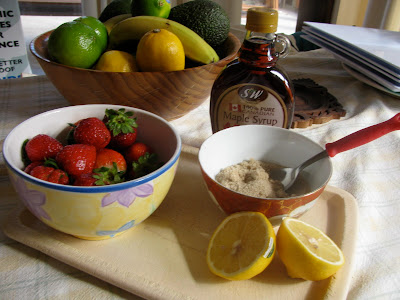 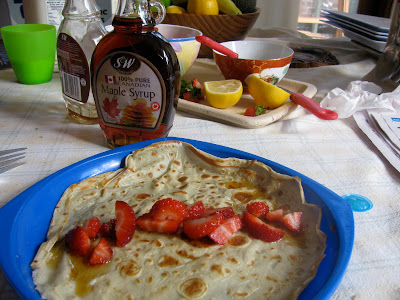 Well thats some food I've eaten this past week! As I don't have much time for blogging during the week I might just try to post recipes I've blogged about lately such as vegetarian biryani, raspberry and banana bread and that blueberry, apple and coconut crumble!
Hannah x
Posted by Hannah at 11:21 AM