Hello :) At the moment I love seeing all the fruit and vegetables at the markets change according to the season. Autumn is definitely my favourite. Last week at Eveleigh markets, it was rhubarb which caught my fancy, all those lovely red stalks in various shades of red. And I just knew rhubarb would go perfectly with a recipe I have been dreaming of for some time now.

It's a rice pudding. Cardamon Coconut Rice Pudding. Basically I wanted to make a rice pudding with coconut milk instead of the usual cream and cows milk affair. Something different, you know. I substituted white rice for brown too, which adds more fibre and nuttiness. Cardamon and cinnamon add warmth and spice, and of course stewed rhubarb or another fruit is essential. 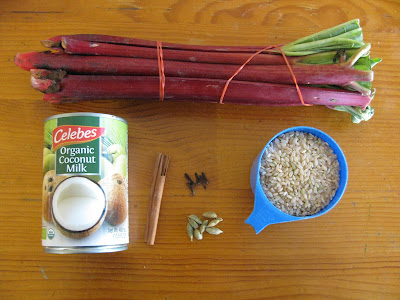 Recipe: Cardamon Coconut Rice Pudding with Rhubarb
Ingredients-
1 cup brown rice
2 cups water
1 cup coconut milk or cream
1/2 cup extra coconut milk or cream (optional)
1 stick cinnamon
6 cardamon pods
cloves (optional)
several stalks of rhubarb
1 tablespoon sugar
Method-
1. Rinse brown rice and add to a pot with the water, coconut milk, cardamon, cinnamon and cloves (if using)
2. Bring to the boil, turn heat right down and cover with a lid.
3. Stir mixture every 10 minutes or so.
4. Turn heat off when the rice has absorbed most of the liquid. This may take 20-30 minutes. If you want to add more creaminess stir in another 1/2 cup of coconut milk and simmer for another 5 minutes.
5. In the meantime, cut rhubarb stalks and rinse. Place in a pot with a small amount of water and sugar. Bring to the boil and let simmer for 5 minutes.
6. Serve the rice pudding with rhubarb and an extra sprinkle of sugar or cinnamon. 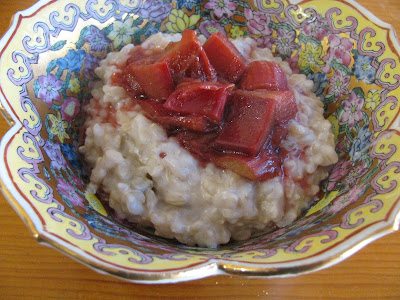 I am rather in love with this simple, comforting recipe; perfect to brighten any cold or miserable day :)