The search for a 'healthy' hot chocolate

Hello :) I stopped drinking cows milk about a year ago. Not particularly for health reasons but because I found it doesn't digest well with me and makes me feel a little sick :( I blame it on my Asian genes and a tendency to be lactose intolerant, but I'm not really sure! I still have a little with my tea and bake with it though.

But ever since deciding not to drink cows milk then I've realised I never drink hot chocolate! To be honest, I never really drank hot chocolate when I did drink cows milk since all the packaged varieties contain way too much sugar! But the weather is getting colder and since it's coming close to winter I've been feeling like a comforting drink after dinner. Herbal tea is nice and I usually have a pot of green tea in the afternoon, but sometimes I just want something more satisfying ;)

I currently use oat, rice and soy milk (with fortified calcium) as a substitute which I mainly have on porridge/muesli in the morning. I suppose I've never made hot chocolate with these kinds as I would never just drink a glass of 'oat' milk, like people do with cows milk, because it doesn't have an amazing flavour. I use it because it's quite neutral and I can stomach it really early in the morning.

But since having a conversation with my friend at Uni today about how she really likes hot chocolate at the moment (we're both nutrition students you see, food is all we talk about...) I decided I wanted to make some when I got home! Luckily I had just bought some raw cacao powder yesterday (because I want to make these raw fudge balls later on tonight) and my mother happened to come home with some dark agave nectar today so I decided to experiment! I heated up some rice milk in the microwave and added a teaspoon of each... 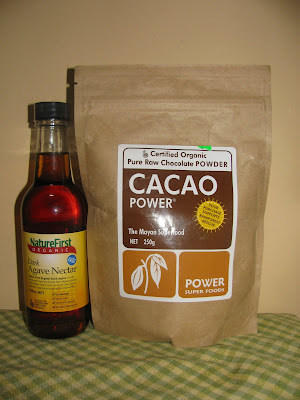 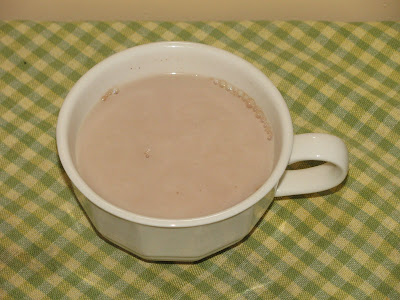 I thought it tasted okay. I mean, it was quite nice and warming but rice milk is quite thin so it didn't have that smooth, creamy texture regular hot chocolate has. Maybe it will taste better will soy milk?
So basically I want to know:
Do you like to make your own 'healthy' hot chocolate (i.e. not from a packet)? What do you put in yours? I want some ideas!!!
I've heard of putting the natural sweetener stevia in hot chocolate instead of sugar or my friend even suggested adding chilli?!
Hannah x
Posted by Hannah at 7:13 PM