Hello :) This lovely Sunday morning, inspired by a breakfast I recently had at a cafe I decided to make some brown rice porridge. Luckily we already had plenty of leftover brown rice in the fridge from the previous night. Since the rice was already cooked I just added the amount I wanted to the pan with some rice milk, so it could heat up and soften. I also added in some pears which are just perfectly in season at the moment and some cinnamon.

After about five minutes the rice was warm and I dished it out into a bowl. I topped with some more pear, greek yoghurt, walnuts, maple syrup and some more cinnamon. All the flavours worked so well together! The soft pear mixed with the tang of greek yoghurt, the slight crunch of the walnuts and sweetness of the maple syrup. None of them were overpowering though, leading to a wonderfully nourishing, warming and healthy bowl of porridge. And a slight change from the classic oat based porridge, which I do love, but wanted to try something different.

Now obviously on most mornings (except the weekend) I don't really have time to cook brown rice for breakfast so I might try cooking a few cups the night before so in the morning I can cook it how I've done today :)

Have I found my new winter breakfast? I think so. 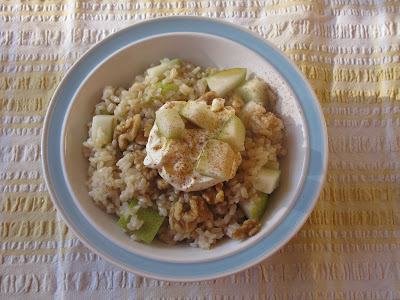 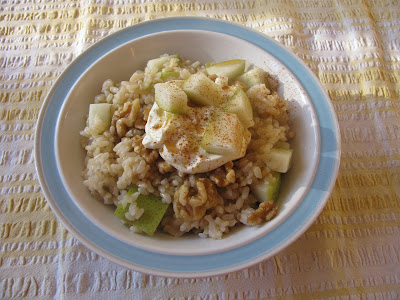 Do you use other grains apart from oats to make porridge?
...
And I think it's time again for some music. This is a band called Boy & Bear who a few days ago played at my Uni bar in fact! I'm quite enjoying their folky vibes... :) And I'm pretty sure this clip is shot in Melbourne, correct me if I'm wrong!
Hannah x
P.S. I added a new feature on my blog! A list of my favourites blog at the moment :) Go check them out!!
Posted by Hannah at 9:49 AM