Hello. This weekend I've been taking it easy as I've been sick for the past week :( It's been a combination of stress, exhaustion and not getting enough sleep I think. I'm really focusing now on taking care of myself, drinking lots of grated ginger & manuka honey tea, eating lots of oranges and fresh vegetables. Despite saying I don't believe in supplements I've started taking an immune supplement with olive leaf, zinc and echinacea which I think is quite necessary and I'm trying to get as much sleep as I can. During the week it can get tough and I actually only get about 6 hours sleep (the reason I've been getting sick I think), so I'm going to aim for 7.5-8 from now on! What do you do to prevent being sick?

... Anyway, here's a few snapshots of my weekend.

This wasn't actually made on the weekend- but a few nights ago my mum made this delicious lasagna with spinach, lentils and a bechamel sauce which I think was photo worthy. It was so nice to come home to dinner made! 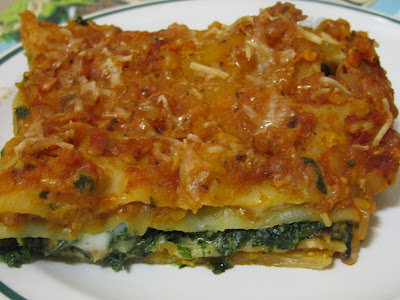 I whipped up this quick quinoa salad yesterday as I was feeling a bit peckish (hahaha it's a joke cause lets face it, quinoa looks like bird seed...). It also had lettuce leaves, olives, tomatoes, cucumber and walnuts with lots of balsamic vinegar. I was inspired to cook quinoa after seeing Sarah's post and like her, I'm going to cook a big batch of quinoa later today so I can make quick, delicious salads for uni next week. 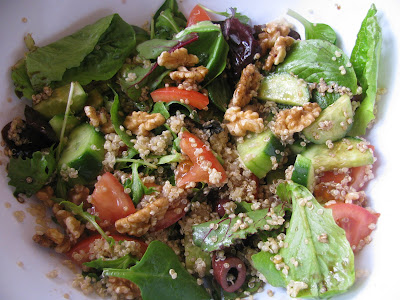 My sister has only recently started liking avocado, which is crazy but also great because she's been making guacamole all the time! We shared this on the couch :) There was so much garlic, gave it a real kick! 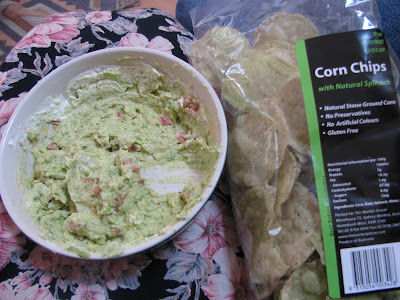 I made these muffins for afternoon tea. I have no time during the week to bake so I always end up making lots of food on the weekend.  I simply added a handful of raspberries, a few tablespoons of cacao powder to the recipe as well as adding melted dark chocolate on the top with a raspberry and icing sugar. Yum! 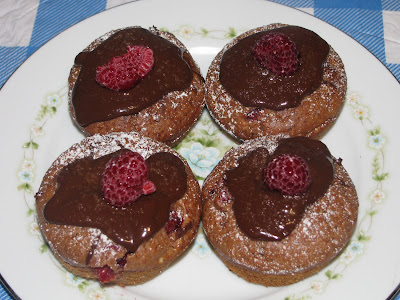 And today I went with Adrian to the city to surf! He was in the blue group, go him! I watched the beginning from the side line, and it seemed a bit like a jumper throwing contest as you can see, as everyone wanted to take off their jackets before the race. Look at them all in the tree! 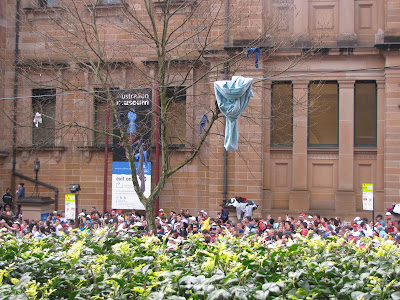 And Dr. Chris Brown was there stretching, for a world record! 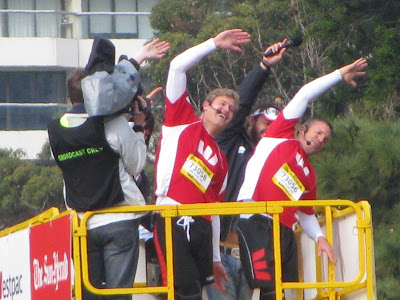 Woo! Adrian finished in about 70 minutes. I had to rush from the city to Bondi on public transport to meet him afterwards. Although it was set up so there were trains and buses every few minutes it did confirm how I dread crowds!! I felt so exhausted afterwards, and I hadn't even run at all ;) 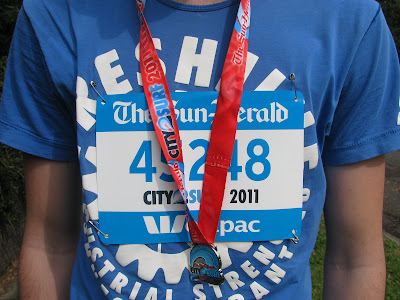 And now I'm getting stuck into some study! Although I must say learning about carbohydrates has made me awfully hungry as you can see ;) 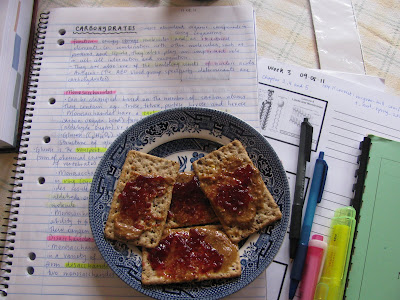 What did you get up to this weekend?
Hannah x
Posted by Hannah at 1:45 PM