Hello :) So last week whilst trawling through The Circle website, as you do, I came across this tasty recipe called "Potato Rosti Breakfast Salad", cooked by who? "The hottie" from Masterchef, Hayden Quinn. Sqeeeee! I never really watched Masterchef this series to be honest, but it was pretty clear who every female wanted to win.

Anyway! This dish looked really yummy so I decided to make it on Sunday for a light lunch. Here's a link to the recipe. You can watch him cook it too! 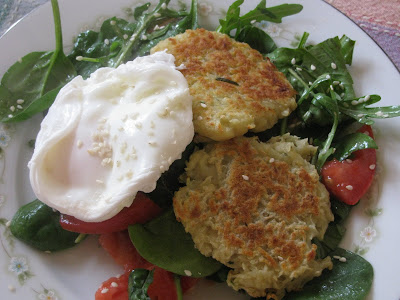 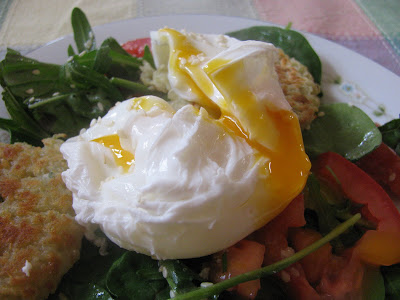 And it was oh so delicious! I can't believe I've never poached an egg before! It was a lot easier that I expected and if I do say so myself, it turned out pretty darn well ;)
The rosti's were great to make as well and tasted like hash browns, yum! I used our small food processor which grated the potatoes in a few seconds. It's very important to squeeze as much water out of the potatoes too.
I enjoyed the salad as well, courtesy of a lovely dressing made out of djion mustard, vinegar, honey and olive oil.
So each of the 3 elements (the egg, rosti's and salad) worked very well together, although I can also see myself making them separately. I might try making the potato rosti's with some sweet potato too...
Oh and he mentioned cooking them with ghee which I know you can easily make with butter, so I might be trying that on the weekend ;)
Have a nice rest of the week! I'm sick at the moment but trying to get better!! :)
Hannah x
Posted by Hannah at 9:57 AM