Hello :) I have just had the most loveliest day! It started with a ballet class, which I'm so glad I can now attend twice a week since I don't have uni. A very nice way to start the week. We're working on our concert performance (exciting!), and it's quite tiring running through the dance over & over again I must say! Afterwards I met a wonderful friend (I <3 you Sabeth!), and we had a late brunch at a place called Silverbean on Enmore Road. It was a very cool cafe, and the staff were just so friendly. We also browsed along King St for a little while, how fun it was to be out...on a Monday!

Going back a day to Sunday, and I was in the mood for baking (well when am I not?). I thought I'd attempt making pastry for the very first time, with a recipe that caught my eye straight away in the Good Living a week or so ago. A Nectarine Tart. I'm so in love with nectarines at the moment actually, they're my go to snack! The recipe is actually gluten free too, although I used regular white flour instead of quinoa flour as suggested.

Method-
Grease & line a baking tray. To make the pastry, combine the flour, cinnamon, egg yolk and water in a food processor and pulse for 15 seconds until the dough just comes together. Shape into a disc, cover with plastic wrap and refrigerate for 15 minutes. Roll out the pastry on a lightly floured surface into a two-millimetre thick rectangle to fit the size of your baking tray, leaving a two-centimetre edge.

Place on the prepared baking tray and crimp the edges neatly using your fingers. Return to the refrigerator for 15 minutes. Preheat the oven to 200 degrees celcius. For the topping, cover the pastry with the nectarine slices, leaving a smidgen at the edge uncovered.

Sprinkle with sugar, dust with cinnamon and bake for 30 minutes or until pastry is golden. Cool slightly and brush with the jam. Serve warm. Serves 6. 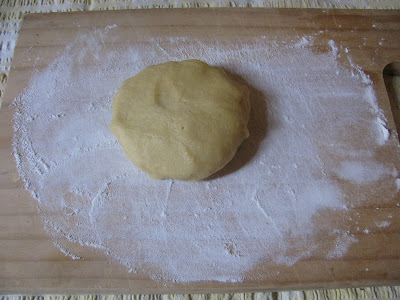 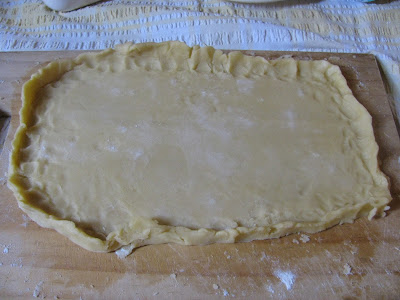 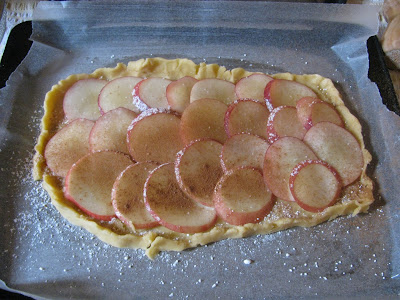 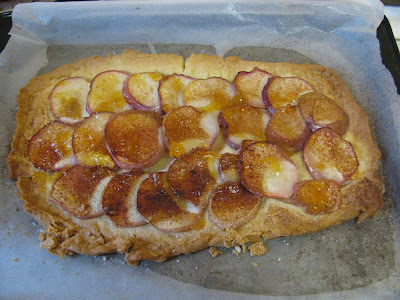 Yummmmm! There's something so rustic & fulfilling about making pastry. I was very pleased with how it turned out! It tasted like crumbly delicious shortbread & I like how the sweetness came from the nectarines and touch of jam. Spreading apricot jam over the top is quite genius!
A fabulous recipe to test out pastry making skills :) I think I'd like to make a sweet pie next perhaps or a spinach & feta quiche. I'm keen to find a recipe without too much butter (like this one).
Does anyone have a great recipe using pastry?
Hannah x
Posted by Hannah at 3:49 PM