Hello :) A lot of the time instead of studying, I tend to read blogs. True story. Although I don't want to promote procrastination, it's fun to stumble upon awesome recipes & get inspiration. And when I was perusing the internet a little while ago I came across Lola Berry's recipe for Prune Choc Balls. So basically, it's the same recipe as those raw fudge balls I always seem to mention, but you swap the dates for prunes. Clever, huh?

So what are the health benefits of prunes? Well lucky for you and I, Heidi recently wrote about this recently you can see here :)

So what did they taste like? Well obviously similar to the raw fudge balls, but the prunes in fact make them softer to chew and sweeter I find. And as you can see, instead of rolling them in coconut, I sprinkled them with chia & flaxseeds, for a nice crunch!

And don't they look yummo! Adrian- I already know what you will say "....they look like birdseed". Which is true, in some respect but the birdseed in this case is very high in Omega 3 :)

My mother actually came home with these large breakfast boosters the other week (she found them in Coles), which are so handy. One container full of chia seeds and the other with flaxseeds, which are simply great to sprinkle on your porridge etc! 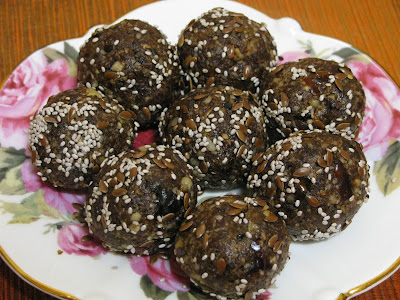 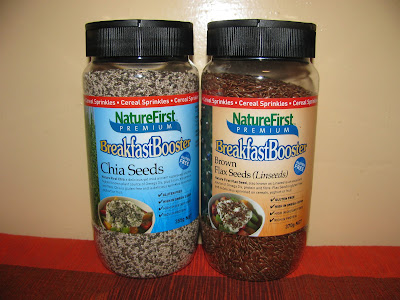 So yes. Very happy with how they turned out! They made at least double as what I put in the photo, but one can only have so many prune balls on a plate at once ;)
In other news, did anyone place a lucky bet on the Melbourne cup? My sister put $5 on the winning horse (number 3, I think) and won $45!!! So jealous...I put $5 on number 14 (my lucky number), and nothing :( Apparently it was initially winning though, then got left behind. Oh poo!
Well speaking of poo, if you're ever after something sweet, delicious & very nutritious to make as an after dinner treat or as a yummy snack, I'd highly recommend you make these Prune Choc Balls ;)
Hope your week has been spectacular thus far!
Hannah x
Posted by Hannah at 8:34 PM