Hello :) On Wednesday evening I had the pleasure of learning how to make Thai salads with Martin Boetz, executive chef at Longrain in Surry Hills (there's another in Melbourne too). It was an event held by the Australian Gourmet Traveller magazine at the Harvey Norman store in Mascot and was a belated birthday gift from my Uncle John & Karen!

...Now I'm just going to mention that I decided because it was a special event I wanted to be adventurous and try everything! This includes meat & seafood! I think I've mentioned this before, but I'm not strictly vegetarian although I'll choose that option 95% of the time as it's what I'm most comfortable eating and cooking...

We were there eagerly at 6pm, for a 7pm start and were given a glass of champagne & a goodie bag on arrival. We were actually the first to arrive so naturally sat in the front row. I didn't really know what to expect and I thought the chef would be a on a mini stage or something, but there was only room for about 50-60 people, with Martin only a metre or so away!

So many fresh ingredients! You could really tell lots of preparation went into the event. 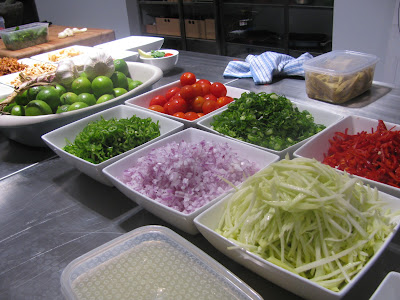 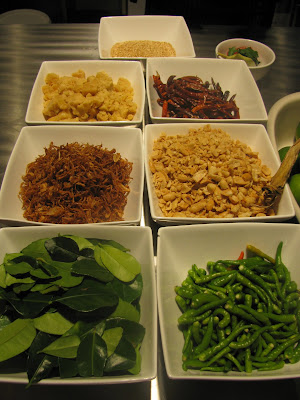 After about 15 minutes, when others started to arrive canapes were served which were sooo delicious! My favourites were the balsamic glazed fig tart with prosciutto and dolce latte gorgonzola and the blini with ocean trout and smoked herring caviar. I'd never tried beef carpaccio before and was a little hesitant knowing it was raw meat (well I haven't actually eaten any beef for a few years!) but I really enjoyed it ;) 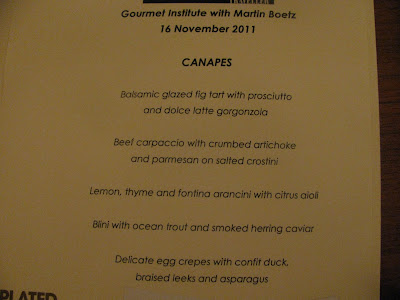 Martin in action preparing our first salad which was... 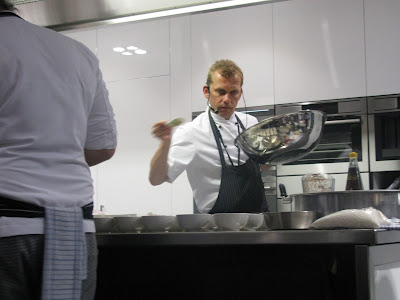 Poached ocean trout with fresh coconut, mint, chilli and peanuts. This was probably my favourite! He made an amazing broth with coconut cream, chicken stock and fish sauce which he poached the ocean trout in. The salad was really fresh and full of flavour and I loved the green mango! 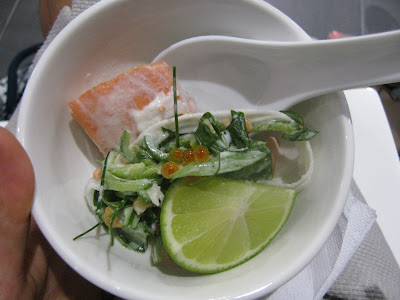 And onto our second salad! The lady on the left of Martin he explained was an apprentice chef as part of a Tafe initiative encouraging young female chefs, by letting them work with a top chef for a one week. 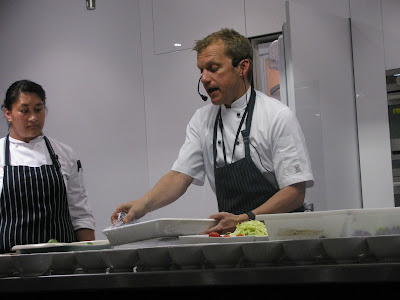 This salad was vegan and so fresh! Chinese broccoli, baby corn and snow pea salad with yam pak dressing. The dressing really made this salad, and he explained how he made tamarind water which gave it a sour/aniseed taste. 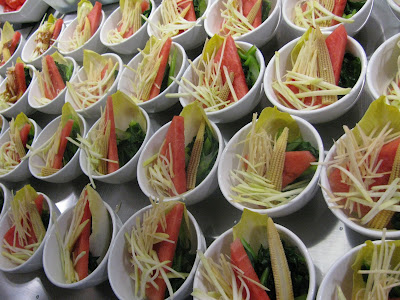 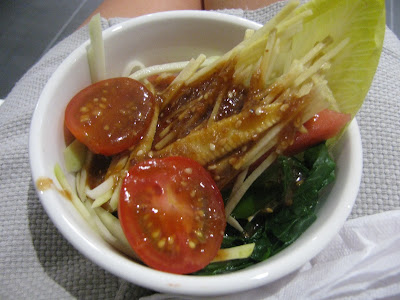 Our final salad was beef carpaccio with sticky rice. We were told to eat this one with our hands, as that's how it's supposed to be eaten. This salad was very hot! He put heaps of chilli powder and sweet chilli sauce in, almost overwhelming! It was quite funny looking around, everyone was fanning themselves and getting a little sweaty! 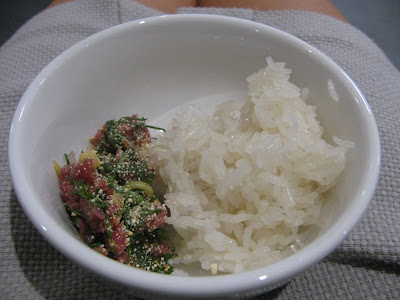 Luckily were were given little tubs of icecream straight afterwards which was greatly appreciated. I opted for classic vanilla, yum!
Obligatory photo with John, Martin & myself :) 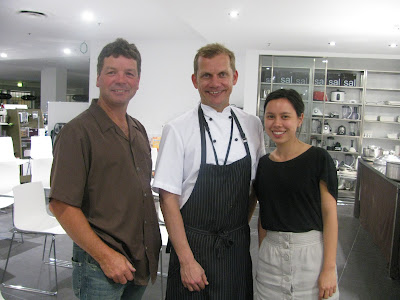 I had such a wonderful evening! Martin was very entertaining and often very funny too. He really knew what he was talking about and took the time to answer any questions. I felt like we were very spoilt, having our wine/champagne filled throughout the evening and given canapes and generous portions of the 3 salads. There were leftovers at the end where people could help themselves to more if they wanted, although I think I had, had enough chilli after the final salad!
And as I mentioned we were given goodie bags :) Here's what they had inside...
The current issue of the Australia Gourmet Traveller, a list of the canapes served, chocolate, cards with the recipes, hair products and chocolate truffles. 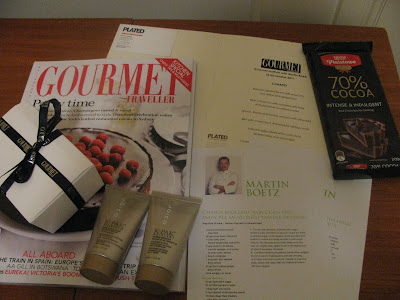 Now if you'll excuse me I've got chocolate truffles to eat... 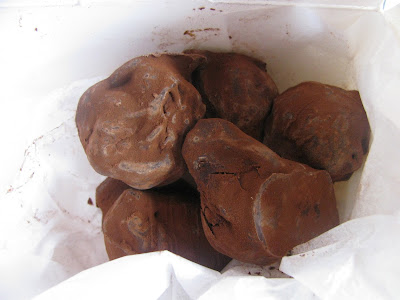 Thanks John & Karen for an awesome, informative and very delicious evening :)
I'm now eager to recreate these yummy salads and learn more about Thai cooking!
Hannah x
Posted by Hannah at 2:55 PM