Hello :) Yesterday I had quite a nice day. I slept in till 11 (oh the luxury!), did some reading then decided to head to the city to look at a few things. After perusing (nice word, eh?) the shops for a little while I decided to have some lunch from Iku Wholefoods in the MLC centre. It's probably one of my favourite 'takeaway' food shops as everything is vegetarian, healthy and delicious! One of the goodies I decided to get was a millet & sweet potato ball. It was delicious with millet and sweet potato (duh!), ginger and a few herbs. The outside was crisp too, but didn't look like it had been deep fried.

Well later that evening when I wasn't sure what to have for dinner I decided to experiment and make myself some millet & sweet potato balls. Luckily I had millet leftover from when I made millet mash, and half a large sweet potato in the fridge.

I just brought 3/4 cup of millet with about 2 1/2 cups of water to the boil and let it simmer, adding the sweet potato which I'd chopped quite finely. When it was all cooked and lovely (about 20 minutes later) I put this in a bowl, mashed it up and let it cool for a bit in the fridge.

Next, I added some grated ginger and chopped shallots and coriander. And then I formed the mixture into balls (it made 15- so a little bit of millet goes a long way!) and decided to fry them in a bit of rice bran oil for a few minutes on each side. They were a bit fiddly and weren't terribly easy to flip over I'll admit.

Anyway, here's how my little experiment turned out! 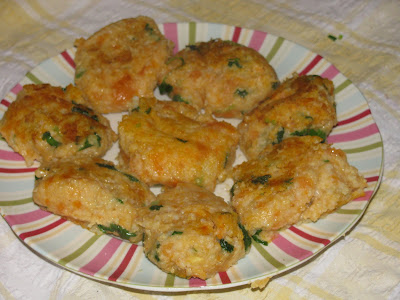 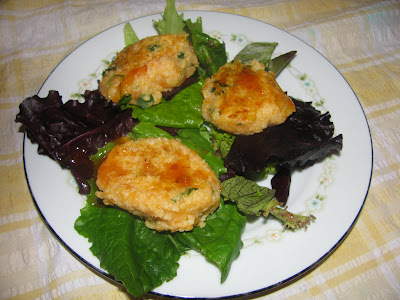 Served on some lettuce leaves with sweet chilli sauce.
They were actually quite delicious (if I do say so myself!). Although I can't work out how they made theres so crisp on the outside? Mine were rather soft I'll admit. So they're more like patties, but thats ok. Maybe I'll try baking them in the oven next time. Oh well, it was a fun and tasty experiment :)
Hannah x
Posted by Hannah at 9:05 AM