Hello :) Hope you've been having a fab weekend! For those in Sydney, did anyone go to Sydney Festival Opening night, last night? I went and it was pretty awesome! The city was packed with people of all ages enjoying the free entertainment, food and just chilling with friends. I managed to see a Circa (a circus act), burlesque, West African dance/music and an act called Smoke and Mirrors amongst other tidbits.

Anyhoo, for lunch today I made a really simple frittata which is a perfect dish for a Sunday lunch as you can use all the leftover vegetables in the fridge from the past week. That half a zucchini lying around, a few cherry tomatoes, frozen peas, spinach, a potato or whatever! It also makes for the perfect weekday lazy meal when you feel like something light but satisfying.

Basically all I did was heat up a small fry pan with extra virgin olive oil, added two small sliced potatoes and fried them for a few minutes before adding some sliced zucchini (yes, we did have half a one lying around in the fridge) and leek for a another few minutes to gently fry and soften. After five or so minutes I added five whisked eggs (with a pinch of sea salt/pepper) as well a few chopped cherry tomatoes, frozen peas and some feta cheese.

After about 8 minutes the frittata was set around the outsides and I transferred it to the griller so the top part could cook more evenly (you can transfer it to a preheated oven for a few minutes- if your pan is ovenproof). Five minutes later, the top was browned to perfection and ready to eat! (I did after a minute or two cut the frittata into fours so the egg mixture at the bottom was cooked. Even if the top looks cooked sometimes underneath it's still eggy and such).

Voila! Lunch is made. This one served 3 people (with leftovers) and I had mine with some rocket/spinach leaves and balsamic vinegar. 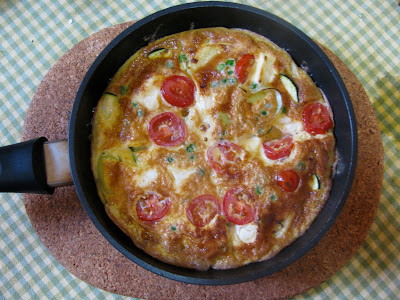 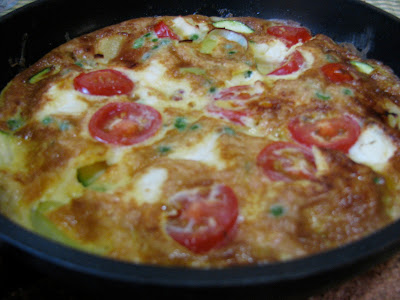 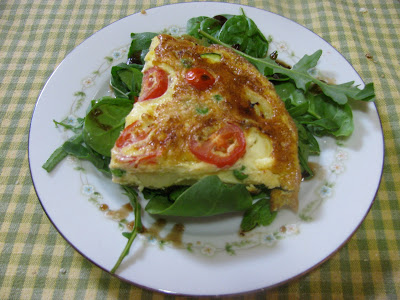