Hello :) I've just seen a really fantastic show on SBS called House of Food Obsessives which has inspired me to write a post on this subject matter. The documentary, made in Australia features Professor Tim Sharp to show the strong link between positive psychology and eating habits. Over a two month period, across the weekends, five individuals with various food issues (ranging from obesity to being underweight) are challenged to face their fears and re-consider more about themselves and underlying issues related to their approach to food.

I think I felt quite inspired watching the show. One of the reasons I can't wait to study nutrition/dietetics is to learn more about psychology and the vital role it plays in our life, especially in relation to food. Choosing when and what you're going to eat is a decision made many times throughout the day. I can't say I'm an expert but "emotional eating" seems to be a case for a lot of people, including myself.

I know throughout the period of exams I did last year I drank more coffee and ate more processed foods than I usually would. The stress of studying and working hard to get the necessary marks I needed for university sometimes meant I ate more than was needed because eating was something else to do instead of studying. Basically, my procrastination sometimes led to eating. This isn't to say I binged or anything but I could see my eating patterns changing. Finishing assignments at the last minute sometimes meant I ate at 2am, become tired the next day and drink coffee for breakfast and so on.

Emotional eating can be understandable though. If a family member passes away, a person is likely to not eat as much or binge eat because their emotions are all over the place. If you've had a crap day, you might reach for the chocolate or in a cliched manner indulge in a whole tub of ice-cream. One of the key issues discussed in the documentary however was how positive psychology can ultimately make a person happier thus the person is more willing to make healthier food choices and cure food and weight problems.

One woman found she kept snacking on unhealthy foods (such as chocolate, chips and soft drinks) in the car. A way Tim Sharp tried to change this was to introduce books on CD's so she could distract herself in a way apart from eating. After re-evaluating her life she also found she had many broken relationships and thus tried to call old friends to try to re-kindle what they once had.

Focusing on positivity and your underlying emotional issues can have an enormous impact on what you eat and your happiness. For example if I was more focused and disciplined towards my study during the period of exams I recently undertook I would have been less stressed and more likely to make healthier food choices. I find this all so interesting. At the moment I'm currently reading a book called "Lunch in Paris" by Elizabeth Bard. It discusses the common truth on how generally French women don't get fat and she talks about her mother in laws slim figure which is maintained by not grazing between meals and not overeating etc. The French seem to have it down pat. Eating fresh produce as well as rich cheeses and wines but not overdoing it. Enjoying food as a pleasure but also knowing when they are content and are satisfied to stop eating.

I think the hard thing about changing eating habits though is getting out of the rut or the bubble you've created. You see what you are now and not the potential you have. Labelling yourself as a "fat" person for instance, obviously brings about negative connotations which can destroy your self-esteem. Change can be difficult. But it's important to not get bogged down in rituals or do the same/eat the same foods everyday. In a way the reason I created this blog was to challenge myself to try different healthy vegetarian recipes and experiment with more foods.

I'm not particularly sure where this post is going, or to be honest what it's really about but the more I think about it, psychology obviously affects every aspect of our life. Not just health wise, but the show inspired me to try new things and get back into the habit of things I used to do.

After I publish this post I'm going to print out the list of my 2011 health resolutions I posted about here . I want "stretch a few times a week" but this hasn't happened yet. So tomorrow morning I'm going to challenge myself and do 30 minutes of a yoga DVD I own. I might even read some of the book I have on Chinese Medicine which I have owned for about a year but have hardly read. As they say, variety is the spice of life. My list of things to do (apart from health) include starting to play my oboe and violin again and doing more crafty things such as quilling and making cushion covers!

Wow, this is a long post which I've written rather hastily. It's a ramble of thoughts, which in a way, is the reason for a blog is it not? So my questions to you. Do you find in your own life the connection between your mind and what you eat? Are you an emotional eater? I think especially as it is a new year, there have been many resolutions made. What are yours? Have you kept them so far? If not, what has stopped you? Are there new things you still want to try? I'm curious. 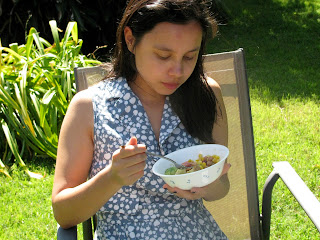