Hello :) This morning I decided to make very healthy Buckwheat Pancakes for a late brunch. They're dairy and sugar free and extremely easy to make. I've come across a few recipes for them, but decided to use Lola Berry's recipe, with a few adjustments.

Recipe: Banana Buckwheat Pancakes
Ingredients:
2 cups buckwheat flour
2 bananas, chopped
handful of pistachios
a sprinkling of shredded coconut
1 egg
1-2 cups water (depending on preferred consistency)
pinch of cinnamon
the inside scraping from half a vanilla bean
1 tablespoon agave syrup (I substituted for maple syrup)
Method:
Mix up the buckwheat flour, egg and water until you've got a pancake consistency. Start with 1 cup of water and add a little as you stir until you're happy with the level of thickness.
Add two chopped bananas into the mixture, a handful of pistachio nuts, a hefty pinch of cinnamon and the inside of half a vanilla bean.
Heat your fry pan (Lola cooks them with extra virgin coconut oil), then pour mixture in. The pancakes can be made any size. When bubbles appear on the surface of the pancakes, they're ready to be flipped over. Top with fresh macadamias, a few slivers of banana and a drizzle of agave. 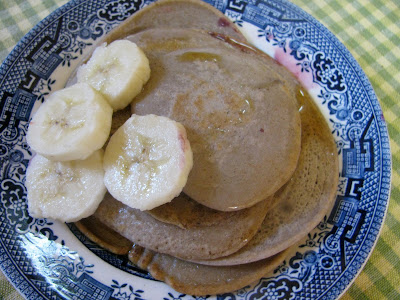 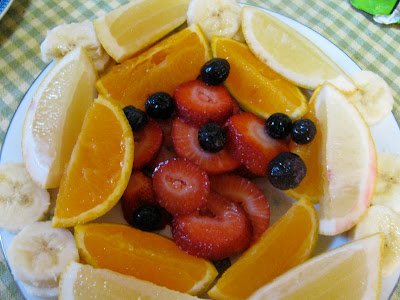 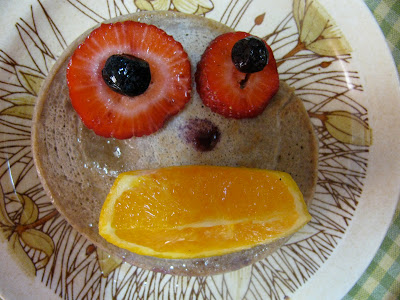 So there's mine! I didn't end up putting bananas or pistachios in the mixture itself, but topped it with bananas and other fruits, and made fruit faces...
I'm going to be honest. They didn't taste amazing. The general consensus was they were nice, but not as great as our usual recipe (which my sister made up for by topping hers with sugar and having a glass of milk). The consistency is very different and instead of being fluffy and light, they were more dense and filling with a nutty taste. I melted some butter in the pan to cook these  cause they were just too darn healthy! Maybe next time I'll try adding the fruit into the mixture and other additions, but for now I want to keep experimenting with other Buckwheat pancakes recipes and see how I go. What do you think?
Hannah x
Posted by Hannah at 2:34 PM