Hello :) It's finally the weeeekend! Now, I can't really talk since I've been on continuous holidays for 2 months already but Saturdays mean there are markets on and today I went to Rozelle markets with a friend (hello T!). We got there about 9:15am (opened around 9am) which is really the best time to go.  I may have made a few purchases too! I don't go every weekend or anything (as I own too many clothes as it is) but some of my other favourites (in Sydney) are Glebe, Paddington, Surry Hills and Kirribilli markets. I usually go for the vintage/second-hand clothing. Farmers markets are great too. Sometimes I go to the one's on Addison Road in Marrickville or the one's at Orange Grove primary. I'd like to go to the Farmers markets at Carriage works in Redfern too. Has anyone been there? Do you like going to weekend markets?

Well after the markets my friend and I went to a really lovely French cafe/patisserie and I had an apple and rhubarb tart as well as a cappinccino. Yummo! Now I really want to make pastry...Actually there's a recipe for an Onion Tart I'd like to make soon, so look out!

I got home around 3, just in time for a late lunch and decided to make a simple, summer-y salad. It consisted of baby spinach leaves, avocado, haloumi cheese (or as my friend likes to say "salty rubber") and sliced peaches. I also just poured a little balsamic vinegar over to dress the leaves. Sounds like a weird combination but I thought the saltiness of the haloumi worked well with the sweetness of the peach. I never think of adding fruits to salads so I might try this more in the future... 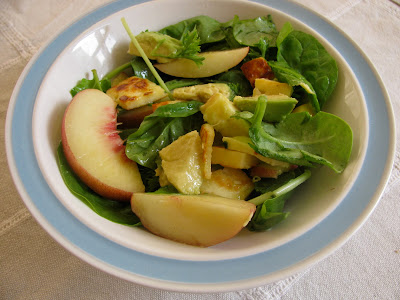 And also, here's a few photos of when I went out for Italian the other night (in Leichhardt):
Caprese salad. Sliced tomatoes (there was more!) topped with bocconcini and basil and served with rocket 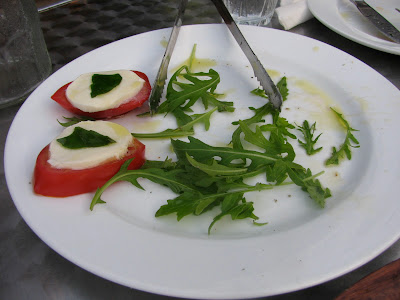 Vegetarian pizza. The ricotta made it extra tasty... 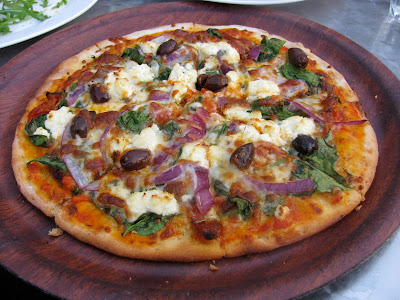 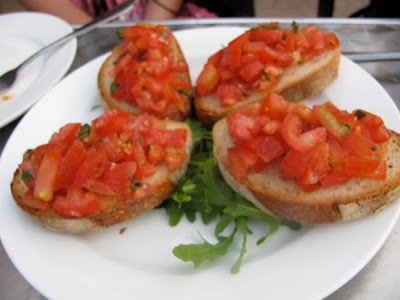